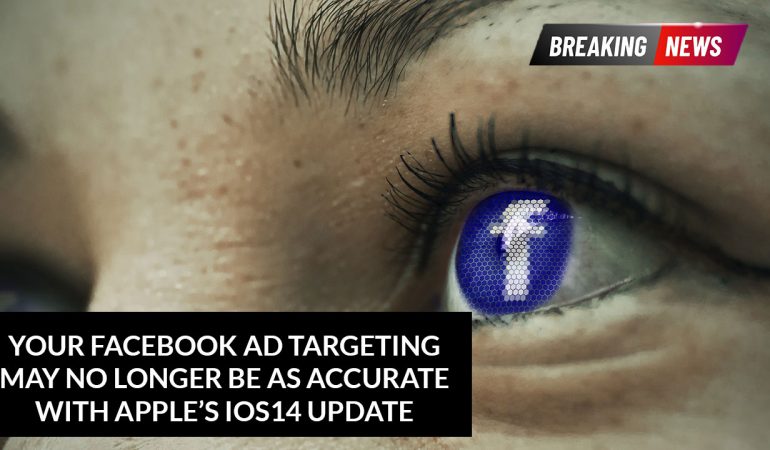 Since late December 2020, there has been a huge buzz in the digital marketing world as Apple’s latest iOS14 policy requirements is set to cause a huge shake up to tech giant, Facebook, who has been dominating the ad space since it was founded back in 2004. The latest move by Apple could potentially see Facebook’s primary USP – it’s ability to offer personalised targeting, diminish and lose its efficiency. Apple’s iOS14 update would impact any Digital marketing agency, entrepreneurs, blogs, big and small business etc, anybody that runs ads on Facebook, and it is set to happen in the upcoming weeks/months.

What is the Apple iOS14 update about?

Apple updates their iOS operating system regularly, providing changes from phone battery life to user interface. The iOS is the standard operating system across all apple products including all the versions of the iphone, ipad etc.

As part of Apple’s latest iOS14 update, Apple introduced the “AppTrackingTransparency” framework, which in essence what it does is allows users to understand if an app in their phone is collecting their data and if so, what type of data and if this data is able to use to track and/or is use to identify them.

On top of informing user’s if they are being tracked by the respective apps downloaded in their phone, the AppTrackingTransparency in Apple’s iOS14 would also require app developers to specifically ask user’s for permission in order for the app to track them.

Effectively, that means that if a user declines, we as advertisers wouldn’t be able to track/target them as effectively or as accurately in the past where we make use of user data to target customers.

This move by Apple is what many believe to be a response to the ongoing global government crack down on personal data and privacy issues by big tech companies. Mark Zukerberg and other tech companies including Google CEO, Sundar Pichai, has been famously called in for a congress hearings in 2018 on such issues. Full details of the AppTrackingTransparency framework can be found on Apple’s official user privacy page

Is the AppTrackingTransparency a big deal and why does it affect my Facebook ads?

The short answer is Yes it is a big deal and it will definitely affect anybody who runs Facebook ads.

As the old saying goes, if a product/service is free – you are the product. And it has been for many years when it comes to Google with Search Engine and Facebook in the advertising space. Facebook and Google collects and tracks your data through cookies placed on sites, your searches, location, your behaviour and interactions on the app etc. And through the long pages of user agreement, these companies forces you to agree to them tracking you before you are allowed to use the app. This is and always has been the case, and thats why we are able to be served super personalised ads based on what we like. While many people don’t like the idea of being tracked – citing privacy concerns, most of us still blindly agree to the long pages of user agreements just so that we can use the app.

This is why AppTrackingTransparency is a game changer because it now allows users an option to select if they wish to be tracked. And even if they do not wish to, they would still be able to use the app as a normal guest user (unless Facebook bans users who select no for AppTrackingTransparency from using their app, but our digital marketing agency don’t personally see that happening as this would cause more user switching to Android). It is like having the cake and eating it too.

Facebook has shown their disdain for Apple’s move to introduce AppTrackingTransparency in their iOS14 update by openly declaring that they do not agree with Apple’s move.

“We believe that free, ad-supported businesses have been essential to the growth and vitality of the Internet, and that personalised ads and user privacy can coexist. We support proactive privacy measures and data transparency, but we don’t agree with Apple’s policy changes.“

How would the AppTrackingTransparency Framework affect my Facebook ads?

When it’s all said and done, the biggest concern for most of us marketing agencies and facebook advertisers are concerned about is how would it affect our business?

First, Apple is the second largest mobile phone producer in the world and changes on iOS operating system would impact a huge amount of people. This new AppTrackingTransparency framework, if users opt to reject the tracking on facebook app, would leave advertisers half blind and unable to effectively target user’s and/or offer personalised ads.

What will AppTrackingTransparency NOT affect?

While alot has been said on what and how AppTrackingTransparency would impact our ads, lets also cover areas that would NOT be impacted.

Data that is collected outside of the app would not be impacted from the AppTrackingTransparency framework. These data include user provided data such as your age, gender, schools, things you list on your personal about me info page.

Pushed data would also not be affected, such as Facebook Pixel data sources as these are also not data tracked from the app.

As an example, a wedding photographer in Singapore may not be able to identify and serve ads to females who based on facebook app data, shown interest in wedding or bride related categories. However, if they choose to target via gender or remarket user’s who went on their webpage, they would still be able to do so with a fairly high degree of accuracy.

What should marketers do with AppTrackingTransparency now implemented?

Facebook has firmly indicated that they will stand by advertisers and would in time provide guidance on how advertisers can work with Facebook to find ways to curb this setback.

However, as digital marketers and advertisers, we cannot wait till then. With this impending policy change by AppTrackingTransparency, I foresee that Google ad spend will increase as advertisers swift their marketing budget to search engines which are web browser base and not affected by Apple’s change.

With a global crack down on privacy and personal data, we would also assume that this would not be the last big personal data change imposed by the FAANG. Mounting government pressure would resume in the post covid world when the focus turns back to privacy protection. It is hence imperative that digital marketing agencies, entrepreneurs, travel blogs, business big and small collect their own customer database which they can subsequently use to remarket and target. This could be through web page email sign ups, setting up of Facebook pixel etc.

With privacy becoming an increasingly important concern in the coming years, the best defence is and always has been the importance of branding. Instead of going to customers, have customers come to you. Efforts must be put in place to continuously improve as with the change of such advertising reach, it is always small businesses that gets affected first.

Enter your email address below to subscribe to my newsletter

Thank you for subscribing.